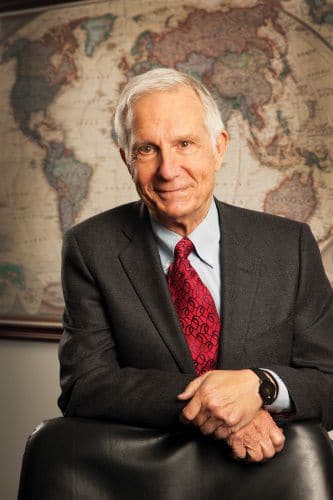 Edward “Buzz” Heidt, Jr. has been recognized for excellence and innovation that enhance the value and quality of the region’s health care by his volunteer leadership.

Heidt began volunteering with a local Red Cross chapter 30 years ago before taking on national and international leadership roles. He has served on the boards of Physicians for Peace, the Switzerland-based Red Crescent Societies, and the International Federation of the Red Cross.

After the 2010 earthquake in Haiti, Heidt provided critical coordination and oversight of international Red Cross relief operations. In March 2015, he represented the Red Cross in a speech before the United Nations detailing the challenges of achieving gender equality and the goals for improving access to health care for women and children before, during and after emergencies.

He is chairman of the board for The Children’s Health System. Under his leadership, the organization has opened surgery centers, medical offices and urgent care centers throughout Hampton Roads and helped make CHKD a regional entity.

The system has launched a new mental health initiative that will include a new inpatient facility and expanded services. Heidt’s long and substantial work for CHKD recently earned him the organization’s Donald W. Lewis Award for service to children.

Heidt has a ready answer when asked how he determines which causes to support.

“I am passionate about global relief efforts, but if you ask me where my heart is, it’s with CHKD,” he said. “You can’t walk around the hospital without thinking about your kids and grandchildren, and how important it is to have a world class facility available regionally. If you believe, as I do, that our children are our future, then we must do whatever it takes to safeguard that valuable asset.”

About Buzz Heidt and Penrod

As chairman and CEO of The Penrod Company, Buzz Heidt is a well-known name in the business community. Penrod, purveyors of forest, metal and PVC products, is headquartered in Virginia Beach, with offices in North Carolina and Oregon, as well as in Europe, Africa, Brazil, China and Canada. While the family enterprise began in 1888, Heidt joined the company five decades ago and assumed his current title in 1983. He directed the company’s expansion into international markets and made Penrod a leading worldwide supplier in the specialty building materials industry. For more information, go to ThePenrodCompany.com.